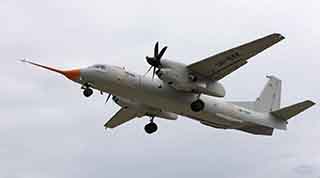 “National aviation is not inferior to world standards and competing adequately on the world market of aircraft construction.

Innovative An -132D impressed the participants of the International Paris Air Show LE BOURGET 2017, having performed its first demonstration flight in the framework of the exhibition” – underlined Volodymyr Isayenko in his speech.