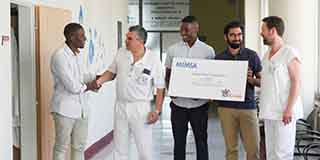 In May, international students at the MU Faculty of Medicine organised a charity week where they sold homemade cakes and muffins, collected non-perishable food, clothes, and toys and organised a number of events. By the end of the week, they had raised 110,000 Czech crowns along with lots of food, clothes, and toys, which have now been distributed among three charities.

“It was the first time we had ever organised a charity week and even though we planned to make it a tradition, we didn’t expect it to become so big at the first attempt. About 60 volunteers helped us with the organisation it and the total number of people involved was around 500,” says Rahil Siddique, the chairman of the charity committee, who is currently finishing the sixth semester of his general medicine studies.

He organised the event together with other students from the Masaryk International Medical Students Association (MIMSA). During the first week of May, MIMSA members sold cakes and other delicacies in the corridors of the university campus and the faculty building at Komenského náměstí. They also visited the paediatric oncology department every day, ran a fundraiser to collect food, clothes, and toys and also organised several sporting events.
Back to news
To main page